When looking at the vast array of people who are members of the Quest Squad, it can be difficult to decide who to focus on for our next feature. When looking at Taylor Chiang, that decision is a no-brainer. Taylor began med school with the goal of serving under-represented communities with healthcare — something this country desperately needs. As a trans, non-binary identifying person, Taylor has dealt with their fair share of othering, but after spending an hour conversing with them, they’re just another human being trying to navigate life during Covid, representing trans people in the areas of sport and lifting, as well as raising the bar in terms of representation in the medical field. In short, Taylor is inspired and inspiring.

Taylor was drawn to sports and physical exertion from a young age, so unlike many of our featured Quest Squad members, they never dealt with a phase where they could be described as struggling with weight. But through all of the competition and sporting, there was another struggle boiling under the surface for Taylor. The question of sexuality and identity.

Taylor: I was a tomboy growing up, I grew up playing sports all the time and around the time I hit 14-or-15 I took it for granted as an after-school activity. By the time I hit puberty and going through those phases, you become more aware that you’re supposed to look a certain way and dress a certain way. You have to be skinny but also eat a lot of healthy food, but also be strong. There are a lot of mixed signals.

When I hit high school, I was in the process of coming out and trying to discover my sexuality. But really, I was just trying to fit in like most kids. Thankfully I went to a pretty liberal and accepting high school, so when I did come out there wasn’t a lot of backlash around that. I struggled internally, but I had friends and support systems.

I found weight lifting was something that I really loved. Moving heavy weights made me realize I could feel good in my body and how I wanted to identify.

What kinds of problems did struggling with your identity pose for you playing on women’s sports teams?

It wasn’t until I was a sophomore in college that I began to identify as trans, non-binary. I realized that by playing with how I presented myself I didn’t fit in with playing on a women’s Lacrosse team. The first two years it never really bothered me that it was a woman’s sport. I played in a skirt, I cut my hair short, but there were other women on the team with the same hairstyles, so I didn’t think too much of it. But after I graduated things started to rub me the wrong way. My coach would refer to us as “fine young women.” It bothered me, but I didn’t think it was the right time or the forum to bring it up. Here I was playing on a women’s team and I didn’t identify as a woman. I was assigned female at birth, but it isn’t who I am. So I struggled in college by telling my teammates to use they/them pronouns because it didn’t seem like the right time, and since I was playing on the women’s Lacrosse team, I didn’t feel comfortable. 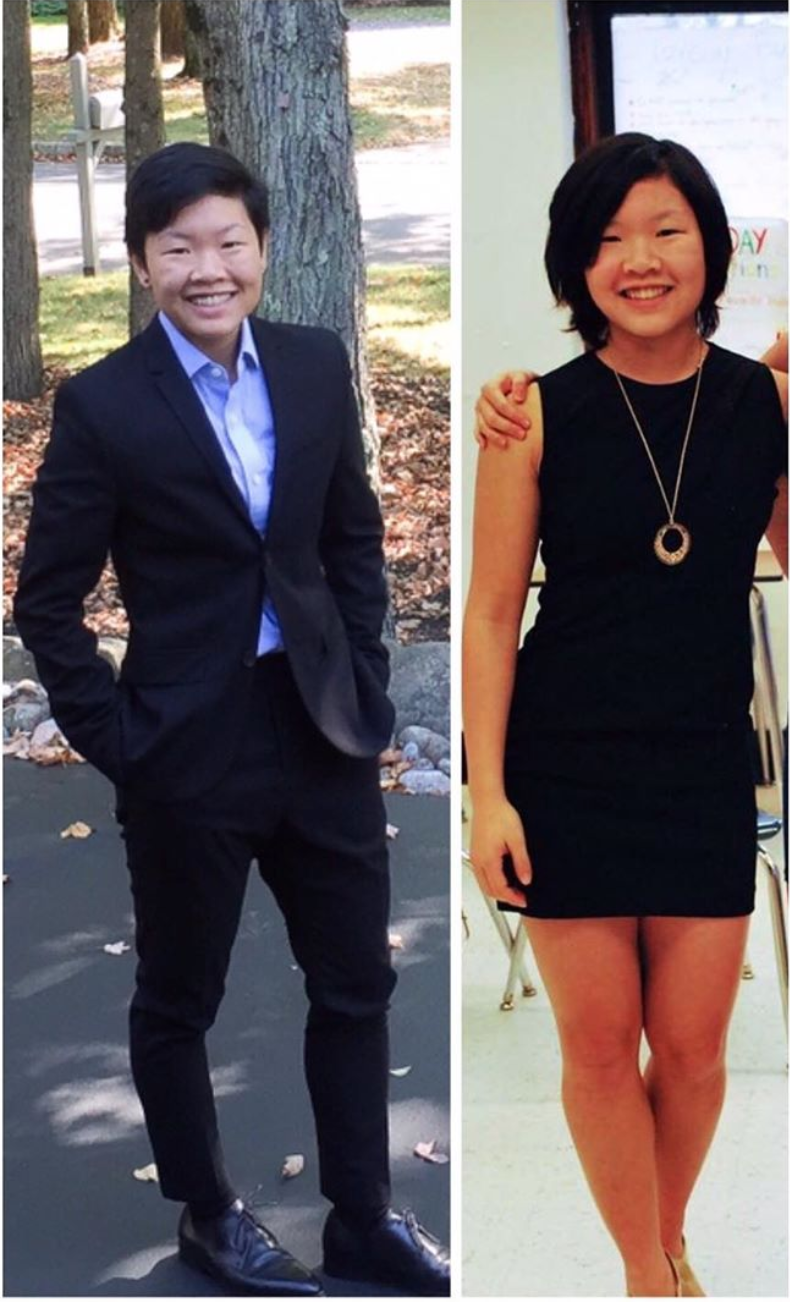 What was the tipping point in your gender affiliation and what empowered that belief?

Taylor: When I graduated, I took a step back and thought about my gender presentation and how I wanted to address the larger world of social media and my friends, to an extent. I found weightlifting was something that I really loved. Moving heavy weights made me realize I could feel good in my body and how I wanted to identify. It was almost a form of therapy for me. It could get me to where I am now and how I want to present in my sexuality. I never thought hormones or surgery were for me. Lifting got me to where I wanted to be, and it’s sustainable (for now) and it feels good, plus the added health benefits. It was exhilarating to work on my form and my lifts as opposed to all the running and training I did in college. It brought a lot of joy into my life.

I think there’s a certain alleviation of dysphoria that people feel, which is why I didn’t get the surgery. I don’t think it would have made me feel better about how I presented. Lifting did, so that’s the avenue I chose to pursue.

Has this awakening in yourself led to any kind of advocacy for trans rights?

It’s actually new to me. I haven’t totally engaged in a lot of advocacy except in the last year or so. I have a voice and I can use it, so I’ve dipped my toes in during the past year. I don’t know what it’ll look like in the future, but I think going to med school and my recent “Share the Platform” grants from Women’s Strength Coalition and Pull for Pride are more opportunities for me to use my voice and amplify other voices and raise awareness of issues that are important to me. For me, that’s trans representation in sports. I think it’s important to knock down preconceived notions and there is a lot of learning to be done, for sure, but that’s what makes it so exciting.

Through this internship I realized I could reach populations that were more entrenched in community outreach. That’s what drove me to achieve an MD to work with and understand underserved populations.

How has Covid affected your overall goals with med school and advocacy?

Taylor: One situation that comes to mind is social media. During Covid there’s a lot of ani-Asian racism. I made a post that was really basic, saying like, “Wash your hands, wear a mask and don’t be racist” and someone replied that “You can’t fight racism just by telling people. Other people have experienced more racism over generations than Asian people.” I took a step back and thought, “you’re right.” We’re at this apex of different issues clashing and it’s easy to get things wrong. Other races have received way more repression than this “model minority” and it’s our job to right those wrongs, amplify those voices and allow yourself to fight for more than one thing at a time. I don’t just have to fight for trans rights, I can amplify other voices and other groups fighting for equality. I get backlash for posting on Instagram by people saying, “posting doesn’t change anything.” I don’t necessarily agree with that. There are better forms of advocacy, sure, but one of my favorite quotes is from Ayesha Siddiqi, it goes “Be the person you needed when you were younger.” I love that, because even on Instagram there are people who look like me and feel like I did, and it could help them through a difficult time. 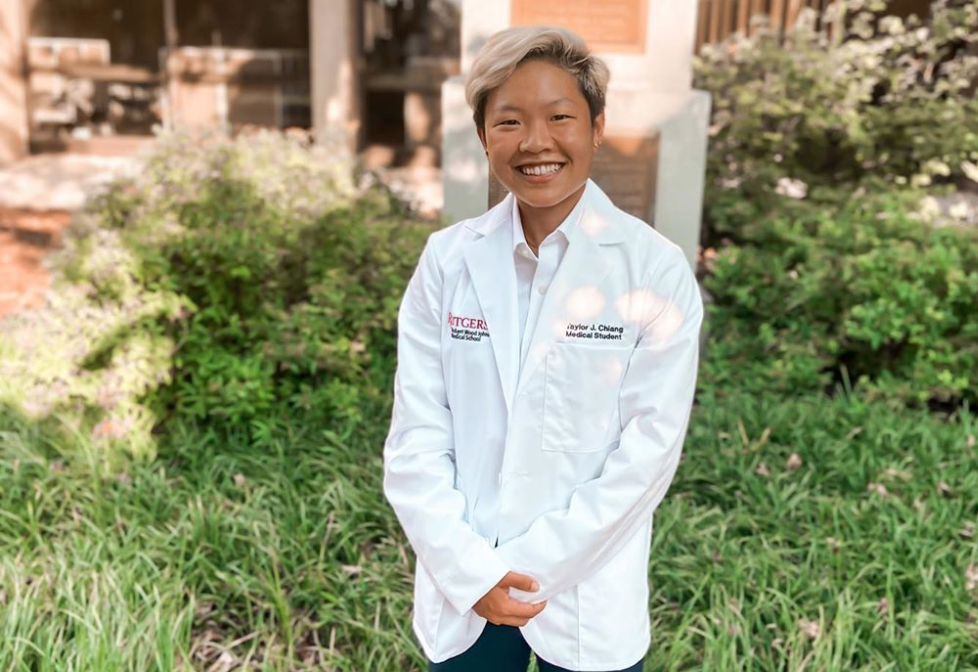 What prompted you to want to go to med school?

Taylor: I always wanted to go to med school but didn’t really have a good reason until my Junior year in college. I had an internship in Philly that was a health design internship that used new technology and medical innovation to help solve medical problems in undersourced communities. During that time I realized medicine doesn’t have to be what you see on TV. It could be more fun and creative. There are problems in the field that don’t get the attention surgery and ER rooms do. Through this internship I realized I could reach populations that were more entrenched in community outreach. That’s what drove me to achieve an MD to work with and understand underserved populations. I want to help get the resources for those communities — it’s a long road and we’ll see where it goes, but I also think I wanted to give more trans representation to the medical field. As someone who uses they/them pronouns, who presents differently than the norm and realizing that even the medical field operates within the confines of binary genders, I’m looking forward to bringing change and moving that conversation forward.

Quest is something I already eat and use and really like so it’s easy to advocate for it.

How does remote learning affect going to something as complex and involved as med school?

Taylor: There are growing pains to learning remote. The doctors that are teaching us already informed us there’d be issues, and I have to admit, it’s a little weird to start medical school online when you’ve seen on TV the hands-on experience you’re supposed to get. It speaks to our time with Covid and Black Lives Matter, and obviously it’s not ideal, but there are larger things at risk than feeling shorted through remote learning. The fact is, there are a lot of things you can learn online and when you look at the big picture of problems right now, having to be safe and receive a quality education at home during a pandemic isn’t a problem, it’s a solution. There’s a certain level of patience we all need to exercise right now and I’m not sure everyone gets that.

How did you first become involved with Quest products and eventually want to join up as a member of the Quest Squad?

Taylor: I think I tried my first Quest Protein Bar in 2015, it was Cookies & Cream and from that moment on I was basically hooked. I’ve been a huge fan since then.

As for how I came to learn about it, I think I saw an ad for joining the Quest Squad and figured, why not? I love the products, I use them in my fitness all the time and it seemed like an inclusive, positive community. Now here I am.

I’ve tried the Bars, the pizzas, the powders and the chips and they’re all really great. I still think that the bars are my favorite and lately the current favorite is the Birthday Cake bar.

I see a lot of other ambassador programs and they’re only interested in you leaving a review or posting positively about the product. Some you have to pay for and they’re really not for me. Quest is something I already eat and use and really like so it’s easy to advocate for it.